Corruption is a serious threat to achieving global health objectives. As Professor Taryn Vian pointed out, corruption increases the cost and decreases the availability of medicines and medical equipment, creates barriers to health services, enables the spread of fake medicines. As I argued in a previous post, corruption also undermines the trust in government that is essential to dealing with public health emergencies. The importance of training and educating public health professionals on how to identify and understand problems of corruption in health, along with how to incorporate anticorruption strategies into programs and institutions, would therefore seem quite obvious. Yet the core public health curriculum at leading graduate institutions generally does not include a serious discussion of corruption and its impacts on public health. There are exceptions–Professor Vian, for example, teaches on this topic in her courses at Boston University’s School of Public Health—but for the most part corruption appears to be absent from public health course catalogs.

It’s not clear why this is the case. It may be that there is a shortage of professors who are knowledgeable or willing to teach on the topic, or perhaps most graduate students do not see the value in enrolling in such a course, especially if they have not witnessed corruption firsthand. Whatever the reasons, the end result is that students graduate from public health programs with little knowledge about the causes and consequences of corruption in the health sector, the reasons why good governance is so important to health care systems, the best ways to prevent, detect, and report cases of corruption. This is a problem. Public health education can and should place greater emphasis on corruption (and related topics like good governance and accountability), for three main reasons: END_OF_DOCUMENT_TOKEN_TO_BE_REPLACED

GAB is pleased to publish this account of the 3rd day of the trial of Equatorial Guinean Vice President Teodorin Nguema Obiang by Shirley Pouget and Ken Hurwitz of the Open Society Justice Initiative. 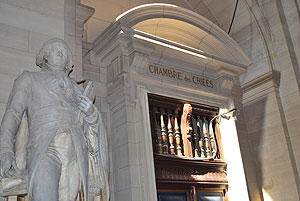 Much of the third day of Teodorin’s trial was taken up with a lengthy, and highly misleading, “explanation” by defense counsel of United States of America v. One White Crystal-Covered “Bad Tour” Glove And Other Michael Jackson Memorabilia, a civil forfeiture action the US Department of Justice filed and later settled that involved property Teodorin owned in California.  The Paris hearing began at 1:30 pm, Wednesday, June 22, with the three judges filing into the august Chambre des Crieés of the Tribunal Correctionnel of Paris.  The Presiding Judge asked the civil parties and the defense counsel to comment on the background to the case she had reviewed the preceding day.  While the civil parties’ counsel had little to say, the defense had much to say — little of which was accurate. END_OF_DOCUMENT_TOKEN_TO_BE_REPLACED

Jonas Guterres, who previously served as an Advisor to the Anti-Corruption Commission of Timor-Leste, contributes today’s guest post:

Corruption in Timor-Leste is a chronic disease that can infiltrate almost all aspects of human life and all sectors of society. A number of mechanisms have been put in place within the nation’s legal framework since its restoration of independence, culminating in the establishment of the Anti-Corruption Commission (the Comissão Anti-Corrupção, or CAC) in 2010. However, the prevalence of corruption remains high. There are a number of factors which explain why the anticorruption efforts to date remain far from ideal. END_OF_DOCUMENT_TOKEN_TO_BE_REPLACED

In April 2014, a post on this blog claimed that the People’s Republic of China’s anticorruption campaign was reaching a turning point, and suggested that the campaign might be “significantly curtailed” in light of troubling signs of economic slowdown and strong pushback from other senior Party leaders. This prediction seemed reasonable at the time, yet more than three years later, the campaign shows no signs of winding down: Reports on senior government officials’ downfalls or corrupt fugitives’ repatriation from overseas still hit headlines on an almost daily basis. A recent development, however, does suggest that China’s anticorruption campaign might be reaching a different sort of turning point—turning from a near-exclusive emphasis on aggressive enforcement to institutional reforms that address the root causes of corruption.

END_OF_DOCUMENT_TOKEN_TO_BE_REPLACED

A couple months ago I was fortunate enough to host Deltan Dallagnol for a presentation and Q&A at Harvard Law School. Mr. Dallagnol is the lead prosecutor in Brazil’s “Car Wash” investigation into high-level corruption at Brazil’s state-owned oil company (and beyond). His remarks covered not only on the investigation itself, but also the institutional, political, and legal factors that have enabled (and sometimes hindered) that investigation. Fortunately, after a few weeks’ delay, Harvard Law School has made the video of the event available here. Mr. Dallagnol’s presentation will, I hope, be of interest to many of the blog readers.

I was particularly struck by his account of the degree of autonomy his office has, both legally and politically, as well as the importance of public opinion in safeguarding that autonomy — see our exchange at 17:53-22:05. That led into another interesting exchange about how much prosecutors involved in anticorruption investigations should speak to the media and comment more broadly on the corruption issues and engage in political advocacy (see 22:06-27:05).

(This was all very different from what would be the norm in the U.S., as you can see in my attempt to try to describe what the U.S. equivalent to what Mr. Dallagnol is doing in Brazil would look like, at 31:19-32:12.)

The defense suffered several significant setbacks at the second day of Equatorial Guinean Vice President Teodorin Nguema Obiang’s trial for theft of public funds, money laundering, and other charges that together amount to kleptocracy.  As GAB earlier reported, Obiang’s lawyers sought to delay the case on procedural grounds and to block Equatorial Guinean citizens from, as French law permits, participating in the prosecution.  The court refused both requests.

Even worse for the VP, the court displayed a detailed command of the allegations against him along with a determination to see they are presented at trial. Accusations that have appeared in the media, civil society publications, or elsewhere will now be tested in a formal, judicial proceeding.  A finding that they are true, that Obiang did indeed rob the citizens of Equatorial Guinea blind, cannot do anything but embolden courts elsewhere to pursue similar cases while confirming to the world the regime’s pariah status. END_OF_DOCUMENT_TOKEN_TO_BE_REPLACED

Corruption negatively impacts health outcomes. As noted in a previous post, corruption is associated with higher infant, child, and maternal mortality, overall poor health, the spread of antibiotic resistance, and many other problems. When we consider the reasons why corruption undermines health, the most obvious include things like theft or diversion of healthcare resources, or how demands for extra “informal” payments to healthcare providers can deprive poor communities of adequate care. There is, however, another important mechanism through which corruption undermines public health: corruption undermines trust in government and government-run services, which in turn can hinder effective health delivery and thereby escalate the spread of infectious diseases, especially in emergency situations like the recent Ebola crisis. END_OF_DOCUMENT_TOKEN_TO_BE_REPLACED

An updated version of my anticorruption bibliography is available from my faculty webpage. A direct link to the pdf of the full bibliography is here, and a list of the new sources added in this update is here. As always, I welcome suggestions for other sources that are not yet included, including any papers GAB readers have written.

GAB is pleased to publish this account of the first day of the Obiang trial by Shirley Pouget, a French lawyer observing the proceedings on behalf of the Open Society Justice Initiative

The worldwide fight against grand corruption took a giant stride forward Monday June 19 with First Vice President of Equatorial Guinea Teodoro Nguema Obiang Mangue standing trial for corruptly diverting millions from the national treasury.  Known to cronies as Teodorin, the case appears to be the first ever where a high-level official, while in office, is called to account for grand corruption before a foreign court. The precedent setting case, the culmination of a decade of determined struggle by French and Equatorial Guinean civil society, is being heard before the Tribunal Correctionnel in Paris.

As the trial opened, the courtroom overflowed with journalists, civil society representatives, and Equatorial Guineans in exile: we were all there to see if indeed a powerful politician whose corrupt activities have left his nation in penury would be held to account.  The three judges hearing the case, all women, took their seats at 1:30. The presiding judge opened by recalling that the accused was before the court on charges of misappropriation of public funds, complicity in the misappropriation of public funds, misuse of corporate assets, complicity in the misuse of corporate assets, and the concealment of each of these offences.  She explained that the court had jurisdiction because each offense, or an element of each, was committed in France.  She then expressed concern that defense counsel had only provided answers to the charges a few days before the trial began.

The defense launched into a series of objections to the commencement of the trial that consumed the entire afternoon hearing.  Teodorin’s high-priced lawyers argued that 1) the case should be stayed pending a final decision by the International Court of Justice in a case between France and Equatorial Guinea, 2) the magistrates’ decision to refer the accused for trial was illegal, and 3) a coalition of Equatorial Guineans should not be permitted to participate in the case as a civil party.  They also raised an unexpected claim based on a highly technical reading of the charging document.    END_OF_DOCUMENT_TOKEN_TO_BE_REPLACED

In 2002, billionaire Jeffrey Loria purchased the Miami Marlins, a Major League Baseball team, for $159 million. In May of 2017, Luria agreed to sell the team for reportedly $1.3 billion, earning a profit of over $1.1 billion. Some of that profit can be explained by the increased valuation of all sports franchises in the last decade, but a large reason for the eye-popping jump in value is the Marlin’s new, privately owned—but largely public funded—stadium. In 2011, Miami-Dade County agreed to contribute more than $400 million for the stadium. Including interest, the estimated total cost to the county is $2.4 billion dollars. Prior to reaching a deal for the new stadium, Mr. Loria donated various amounts to local government officials, including $40,000 to the county commission chairman in 2008, and $50,000 to Mayor Alverez.  (The SEC conducted a four-year investigation into whether Loria’s donations were unlawful bribes, but ultimately dropped the investigation.)

Such a story is common in sports stadium construction. In the past 15 years, more than $12 billion in public money has been spent on privately owned stadiums. The loans used to pay for such construction, typically tax-exempt municipal bonds, will also cost the federal government at least $4 billion in taxpayer subsidies to bond holders. There’s an ongoing debate about whether taxpayer dollars should be used to fund privately owned stadiums, but that’s not my focus here. Rather, I want to focus on how this system creates opportunities for corrupt deals between team owners and local government officials.

Before government officials vote on whether to approve public funding for a new stadium, the team’s billionaire owners often make “campaign contributions” to the responsible government officials. It is difficult to prove that these donations are unlawful bribes, as doing so would require proving a quid pro quo exchange. Yet when billionaire owners donate to local government officials, who then happen to approve hundreds of millions of dollars in public funding for the billionaire’s stadium—which directly increases the value of the owner’s assets by hundreds of millions of dollars—it looks a lot like bribery. The example of Mr. Loria making donations to Miami-Dade officials is hardly unique. Consider the following additional illustrations:  END_OF_DOCUMENT_TOKEN_TO_BE_REPLACED