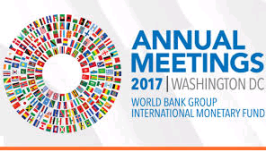 orld’s finance ministers serve as the governors of the World Bank and meet this weekend to review the Bank’s activities over the last year and set policy for the coming one.  The annual meeting is the first since the OECD released a remarkable document, one that subtly but unmistakably  damns the development community for failing to curb corruption in the projects it finances. In skillfully-crafted prose that points the finger at no one miscreant while charging all with dereliction of duty, the OECD’s Council for Development identifies weaknesses large and small in the corruption prevention efforts of both bilateral and multilateral development organizations and urges major reforms.  Corruption in development projects not only defeats the reason development aid is provided but, as the council stresses, many times leaves the recipient worse off than had no aid been extended in the first place.

The Bank’s Board of Governors should make the report and its recommendations the focus of their meeting. For two reasons.

One, the Bank itself has not done the best job of preventing corruption in its activities.  Some examples: a report by its own evaluation department concluding that the failure to address fraud and corruption in lending to the poorest countries constitutes a “material weaknesses . . . in [its] overall operations cycle management;” staff complaints of endemic corruption in its Africa lending program; an audit by the Bank’s Integrity Vice Presidency finding that as much as 75 percent of the money in a project directed at Kenya’s most vulnerable was lost to fraud and corruption.

Beyond putting its own house in order, there is a second and more important reason finance ministers should make preventing corruption in Bank projects the focus of this year’s annual meeting.  For all its shortcomings, the Bank remains the world’s leading development agency, both in resources provided and in the intellectual direction it sets.  If the Bank were to put the emphasis on corruption prevention in its projects that all indicators show is warranted, it would spur other donor organizations to follow its example, agencies whose failures to curb project-based corruption, while far less publicized than the Bank’s, are likely equally if not more egregious.

The OECD report lists ten common sense steps donor agencies should take to minimize the chances corruption will infect their projects; they range from ensuring all agency employees are bound by a code of ethics through conducting regular project audits to ensuring the existence of ways staff and recipients can blow the whistle on corruption.  The critical measure is listed fifth: incorporating a method for the “active and systematic assessment and management of corruption risks” in every project.  This means that when designing a project donor staff and their counterparts in the recipient government should assess the areas where the risk of corruption is both the greatest and likely to be the most harmful.  Once identified, the next step is to ensure mitigants are in place to reduce the risks.  The final step is to monitor the project, both to ensure that no new or unforeseen risks emerge and that the mitigants are indeed implemented.

The Board of Governors should begin its review of how the Bank can improve its efforts at preventing project-level corruption by taking a close look at how corruption risks are assessed and managed.  Not only because it is the first, critical step in corruption prevention but because the Bank has shown it has the expertise to develop robust assessment and management plans.  Two weeks ago this blog applauded the risk assessment and mitigation plan in the Bank’s La Guajira Water and Sanitation Infrastructure Project.  Several obvious questions follow from this example of a first-class risk assessment and management plan –

The Bank’s Board of Governors has an opportunity to put the Bank in the lead on one of the most critical issues the development community faces over the coming decade: purging corruption from development assistance.  Will it seize the mantle of leadership?

6 thoughts on “Curbing Corruption in Development Projects: Memo for the World Bank Board of Governors”

This site uses Akismet to reduce spam. Learn how your comment data is processed.